Posted on February 26, 2013 by LibertyInsight 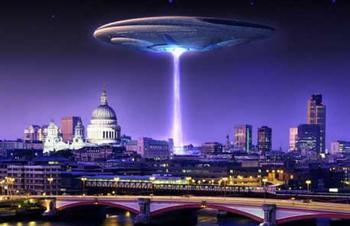 According to sources inside the White House, the odds of invasion from an intergalactic armed force will be greatly enhanced if the sequester is not avoided, as reported by CNN.

“If these draconian budget cuts go through,” said a source who wished to remain anonymous, “many of the 52,000 Dept. of Homeland Security agents, who sit on remote mountain tops scanning the night sky with binoculars for alien warships will need to be furloughed. This will greatly hinder our ability to detect an invasion in a timely manner which could lead to the total destruction of life as we know it and enslavement of the human race by alien ant overlords.”

A high ranking officer at the Dept. of Defense echoed those concerns. “The devastating cuts would cripple our military to such a degree that we’d practically be inviting space aliens to attack. With no means of defense from the world’s lone super power, the entire human race would be doomed. Even if space aliens don’t attack, these drastic and irresponsible cuts would mean we could only wipe Iran off the map 375 times.”

White House Press Secretary, Jay Carney, summed up the sequester debate in a recent press conference. “The choice is simple, we can either take responsible measures to avoid these draconian, meat-cleaver cuts, or we can follow the republican plan in which space aliens eat our men and enslave our women and children.” He latter added, “Draconian!”

However, brilliant economist and Nobel Prize winner Paul Krugman sees a silver lining in an attack by space aliens. “While I generally abhor these draconian and stupidly irresponsible spending cuts, the good news is that a prolonged alien attack would destroy vast amounts of property and infrastructure. This would allow us to print tens of trillions of dollars to build up a massive arsenal to fend off the attack and then provide millions of jobs for years to come as we rebuild our scorched cities. While the loss of life would be unfortunate, it would really jumpstart the economy.”

Ok, so CNN actually didn’t report any of the above, but it’s not far off from the devastating picture the media is painting about the so-called sequester. (Yes, I actually watched about 15 minutes of CNN coverage the other day.) For a good tally of all of the ways the sky will fall, check out the ABC News piece: 57 Terrible Consequences of the Sequester.

Is all of this Chicken Little reporting warranted? Let’s assume the sequester goes through as planned. First, it’s important to note that the federal government will still spend more in 2013 than it did in 2012 and increase spending in every subsequent year. The 0.4% increase in spending in 2013 is less than the 2.8% increase without the sequester which counts as a spending cut in Washington D.C.  However, to be fair, the cuts are mostly in “discretionary” spending which does actually decrease by 5.6% from 2012 spending.

To illustrate how “draconian” these cuts actually are, let’s lop a few zeros off the budget and pretend it’s a family budget. Last year, this family earned $24,490 and spent $35,380. They used their credit cards to pay the difference and have for the past several years so their credit card balance is now $160,000 and growing by over $10k per year. (luckily, they are able to keep finding new credit cards with a teaser rate so their interest payments are pretty low for now.) On top of that, they were supposed to have been paying into a fund for their retirement and future medical bills each year, but haven’t so that fund is now $2 million short of where it needs to be to provide their expected future payments. (They rarely mention this fact to the kids.)

In 2013, they expect to get a raise and earn $27k. They had hoped to spend $36,380 this year–  $21k of that is mandatory spending they have already agreed to pay each year for grandma’s medical bills and living expenses as well as supplemental living expenses for a poor neighbor. $2,200 is interest on the credit cards. (As usual, they’re going to skip the roughly $100K they should be putting into their retirement fund this year because after all, that’s a long way off.)

Here is where the sequester comes in. Little Susie noticed that Mom and Dad aren’t managing their finances very well. She is going to be stuck with a huge bill in a few years when they retire with no savings, huge debts and enormous medical bills. So last summer she asked Mom and Dad if they could work on the budget deficit. “Don’t worry sweetie,” they said, “We will find some cuts we can both agree on and if not we will automatically reduce spending on the things we each love most by $850 in 2013.”

Well, it’s 2013 and Mom and Dad couldn’t compromise so it’s time for the automatic cuts.  They call little Susie and Bobby into the living room for a family meeting. “Kids, we know we said we cut our spending this year but this is a critical year for us and if we make these  draconian cuts it will be devastating. We have promised to cut or purchases of milk, eggs, meat and vegetables from Mom’s shopping, gas for Dad’s commute, babysitting for the kids, and our alarm system for the house. If these cuts happen, we will all go hungry, your dad won’t be able to drive to work as much which will decimate our income, there will be no one to take care of you when we aren’t home and criminals will break into our house and steal everything. (And space aliens may attack.) So you see, we need to avoid these cuts now so we can work out a long term solution when our situation improves.”

Susie and Bobby have a few questions:

“Why don’t we give each section of the budget some leeway on what to cut? Mom could cut out junk food instead of milk and we could eat out for dinner one less time per month. Dad could still buy gas to get to work but forgo a second new business suit this year. (or go to Joseph A. Bank) We kids could go with a few less toys and instead of dropping the alarm system we could get a cheaper cable package or just do a better job of turning out the lights when not in use.”

“If things were so critically tight, why did you just give Bill next door $500 in January to clean up his yard from the storm? Come to think of it, why do we give $230 every year to that family clear across town? They don’t even like us.”

“If nearly 80% of Dad’s salary automatically goes to pay Grandma’s medical bills and chip in for the poor unemployed neighbor, and both of those expenses are expected to rise at a much faster rate than Dad’s salary, won’t automatic spending soon eat up our entire income? If that happens won’t the credit card companies jack up our rates or cut us off? Grandma is a lot richer than us kids (considering we are $2 mill in the hole for Mom and Dad’s retirement) can’t she pay for some of her medical care when she can afford it? That poor neighbor is able bodied; wouldn’t he have more dignity and be a more productive member of society if he got a job instead of sitting on the couch collecting a check from us?”

“And, I know you don’t like to talk about it Mom and Dad, but what happens when you boomers retire and you’re expecting to get certain payments for your medical care and living expenses? We’d need $2 mil in the bank now earning interest and we’d need to add another $80k-$100k each year to keep up with your future payouts, but Dad only makes $27K. And we kids are already in debt for $10,000 for our tuition bills with a weak job market. Do you think maybe we need to reexamine our long term strategy a bit?”

“I, for one, welcome our new insect overlords!”

2 Responses to Breaking: Sequester to Increase Risk of Alien Invasion