Dipping My Toes Into Anarcho-Capitalism (the water feels nice)

Posted on January 14, 2013 by LibertyInsight 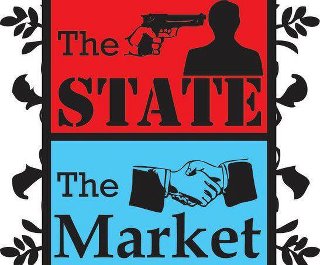 As a staunch libertarian, it’s pretty rare for me to come across someone who is more libertarian than I. By “more libertarian”, I mean that they believe in even less government than I do. Perhaps that’s why I was oddly excited, intrigued and energized when I first heard libertarian/anarcho-capitalist, Stefan Molyneux from Freedomain Radio as a guest host on the Peter Schiff radio show.

To back up a bit, most people are shocked when I tell them I think the federal government should be about 5-10% the size it is today. At a time when Democrats and Republicans in Congress can’t seem to find areas to even slow the growth of the budget, I would lop off 90-95% of federal spending if I were in charge. If we returned to the government laid out by the Constitution, I argue, the tiny federal government would provide national defense, (the kind that defends U.S. soil from invading armies, but does not police the world and embark on wars of aggression and empire) it would have a small court system to prosecute a few federal crimes like treason, ensure free trade among the states, and deliver the mail (although, nowadays they shouldn’t be doing that either). Then the tiny state governments could fill in the gaps by protecting property rights, enforcing contracts, and prosecuting violent crime.

Since nearly everyone wants more government than I do, I’ve heard all of the arguments from that side of the ledger. They’ll argue, “But of course we need the government to… (insert government program here). Don’t you want… (roads, clean air, education, a safety net, people not to become drug addicts, poor people not to die in the streets)” Well, of course I do; I just believe that there are better ways of achieving those ends than through a state controlled monopoly that uses force and coercion as its means.

As I hear the tiresome arguments for more government control and centralized power I just shake my head and think to myself, “Common, Bob (or Joe or Sally). You’re a smart and creative person. Can you really not rack your brain and come up with any way we might educate our kids other than having Washington DC take a chunk of everyone’s paycheck and then dictate the curriculum for union teachers to regurgitate on a chalkboard? Can you not imagine how potholes might get filled or food might grow without federal subsidies? Do you not realize that we didn’t even have an income tax for the majority of this country’s existence?”

Back to the radio show, as I listened to Mr. Molyneux discuss true freedom from a philosophical approach and explain why he viewed “the state” (i.e. government) as immoral, violent and unnecessary, I began to wonder, “Was I guilty of the very same unquestioned acceptance of the need for “some” government as the big government people I had so smugly deplored?”

My rationale for these beliefs, which seemed self-evident, was that we needed some level of government to protect us from violence and fraud, and that the writers of the Constitution did a pretty good job of drawing the line between a government that protects us without encroaching on our basic freedoms. In short, as a nation, we voluntarily agreed to relinquish a tiny and precisely defined bit of freedom to elected officials in exchange for a functioning society. If we could just get back to that strictly limited government of the Constitution, 99% of our problems in society and in the economy would be improved or disappear completely.

I still believe that a Constitution sized government would alleviate most of the problems we face today. But after listening to several of Mr. Molyneux’s podcasts and learning more about anarcho-capitalism through the works of Murray Rothbard and others, I’m starting to wonder, “If getting rid of 95% of government would be great, why stop there?”

By now you may have visions floating around your head of teenage hooligans with black bandanas across their faces throwing bricks through windows, or African warlords driving around in Jeeps smoking weed, blaring music and shooting at people for fun. At least that’s the vision I used to get when I thought of Anarchism. But what the anarcho-capitalists are presenting is something entirely more civilized. There are still rules, contracts, property rights and societal norms for moral behavior, only they would be enforced by private entities in the market that people interact with voluntarily rather than government agents who are granted a legal monopoly on the use of force.

I realize it’s a hard topic for most people to wrap their head around. Heck, I’m a longtime  libertarian (not sure how I missed Rothbard’s views on this) and the idea of a completely stateless society is a mind bender for me. At first, the whole idea raises more questions than it answers. Who writes the laws? Would we even have laws? How do you enforce them? What if someone invades us? In the absence of a government wouldn’t some warlord or dictator just rise up and grab power? But the more one learns, the more one opens up to the possibilities of how society might function in the absence of a formal state.

Am I a converted Anarcho-Capitalist? Not yet. I’m just getting started in my learning on the topic. I certainly need to bone up on my Rothbard. I will say that I have begun to question my beliefs on the best way for society to function. I’ll also say that the more I have learned, the more I feel that not only might a stateless society be possible, but it might be vastly superior to any type of government. I think the picture at the top of this page say’s it best: government is a gun, the market is a voluntary exchange. (If you don’t believe me, try not paying your taxes.)

If your curiosity has been piqued, the clip below is an introduction to how a stateless society might function, by Stefan Molyneux. It’s almost a half hour and requires some concentration so I’d recommend listening when you have some quiet time.

If you are interested in learning more, I’d recommend checking out the Freedomain Radio podcast. Mr. Molyneux is extremely smart, and well versed in philosophy, psychology and world history. His podcasts are entertaining, challenging, compelling, quirky, and above all, genuine.  I learn something new every time.

A few words of caution: He tends to ramble a bit (ok a lot) and often doesn’t provide supporting facts mainly because he’s mostly concerned with morality and logic and also because for many of the podcasts he’s doing it while driving home from work. He is rigid in his morality and ruthless in his condemnation of religion, war and military people, and abusive parents (his definition of abusive parents is pretty broad) so if you are sensitive about these topics consider yourself warned. Also, there are over 1000 podcasts so you will want to be selective. Perhaps select the category:anarchism on the right side of the page to find the podcasts on this topic.