Last Weekend I Went to a Barn Raising.

Posted on November 20, 2010 by LibertyInsight

Actually, it was a baby shower. It was a barn raising and a baby shower. Maybe I should clarify. Some friends of mine are building a small guesthouse/office in their backyard. They’re also building a family, with a three year old son and a new addition to arrive soon. 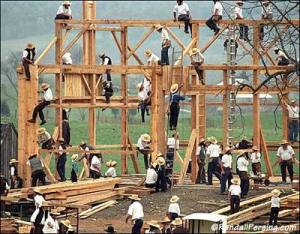 The husband, an architect, has been spending the majority of his free time coordinating the construction and doing much of the building himself. (The wife is also an architect but she’s got her own heavy lifting to do.) They have some left over baby clothes, toys and furniture. What they don’t have a lot of, is time.

The baby is due to arrive in a few weeks and it’s essential that the guest house is completed by then so it’s not hanging over their heads (ok, ironic choice of words) when the newborn (and the grandparents) arrives. Some of their friends had the brilliant idea that instead of a traditional baby shower, we should all pitch in to help finish the guesthouse.

A few things struck me about the occasion. First, it was a lot of fun. It was great to see some old friends and meet some new ones. It was nice to do some old-fashioned manual labor on a beautiful autumn day. While we may not have been as efficient as a professional crew, with our many hands we managed to get a good bit accomplished.

I also wondered what it would be like if we handled the barn raising the way we handle many problems in this country? There must be others across America in the tough situation of having to complete a major project before a new baby arrives. It’s a down economy and it can be expensive to hire a professional crew to speed up the construction. How about if the federal government instituted an “Expecting Families with Overhanging Projects Tax Credit.”

Families, like my friends, could fill out an application which would then be reviewed by a government official to determine if they were worthy of the credit. Instead of a few of us spending our Saturday afternoon painting and hammering, the entire country could just work a few minutes longer to send extra tax dollars to Washington to fund the program.

Sure, some of the money would get siphoned off to pay the new bureaucrats needed to run the program; and yeah, there may be a few people who try to take advantage of the program illegally; and maybe it’s a bit more paper work; and perhaps the design of the guesthouse may need to change to meet the requirements of the program on top of the local zoning and inspection requirements; and there may be a few curmudgeonly people who resent having to help pay for a new guest house for someone they don’t know.  But think of all of the jobs it would create for contractors, bureaucrats, and maybe some lawyers. Plus it’s only a few minutes out of everyone’s day. It would be a boon for the economy and we’d have a bunch of new guest houses which would raise property values.

The point is, when the government gets involved there are all sorts of inefficiencies and unforeseen consequences. Why do we always turn to the federal government first, when most of our problems can be, and traditionally were, handled by families and local communities? When the government takes the productive labor of some in the form of taxes and gives it to others, that’s coercion. When friends and neighbors voluntarily chip in with their time and effort, that’s cooperation.

Our little barn raising party not only helped build a guest house, but it also built a sense of community, and it made everyone involved feel great. And we didn’t need a single bureaucrat to do it.

This entry was posted in Community and tagged community. Bookmark the permalink.